Massacres in October result in the deaths of at least 513 people including 159 children and 62 women, UK-based rights group reports 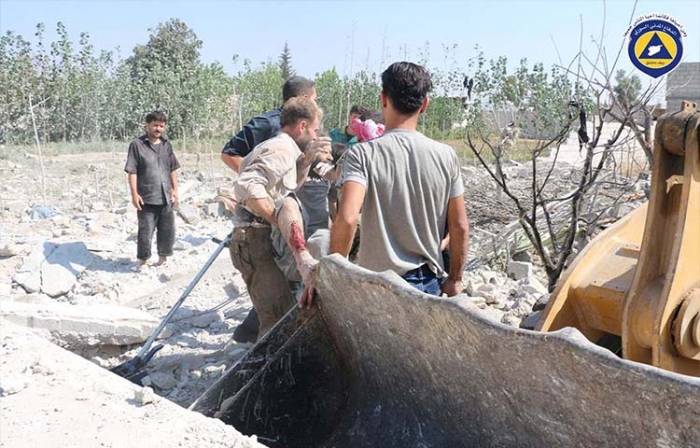 Women and children account for over 40 percent of deaths from massacres committed in the month of October alone, the Syrian Network for Human Rights said in its monthly report released on Wednesday, November 4.

According to the report, regime forces committed 29 massacres, 11 of them in Damascus, seven in Aleppo, six in Homs, three in Idleb, in addition to one massacre in Deir-ez-Zor and one in Hama.

Russian forces were responsible for 10 massacres over the past month, five of them in Aleppo and two each in Homs and Idleb, and one other in Hama,

The report also documented one massacre in Aleppo committed by an unidentified group.

In total, the massacres resulted in the deaths of 513 people, including 159 children and 62 women (43 percent of victims were women and children). According to the network, the figures are "very high," indicating most massacres were committed against civilians.

The Network explained the term "massacre" was used to describe any event where at least "five peaceful people are being killed in one attack."

The report also stressed that government forces had violated the provisions of international human rights law that protects the right to live by engaging in acts of random shelling, as they were either deliberate or random, and targeted a number of unarmed civilians.

The Network concluded its report by calling on the Syrian government to allow all relief and human rights organizations, journalists and the UN International Independent Investigation Commission to enter Syria to ensure the protection of civilian life.