Hard-line group lists a number of new infractions for citizens, including driving without a license, driving the wrong way and displaying writing on vehicles 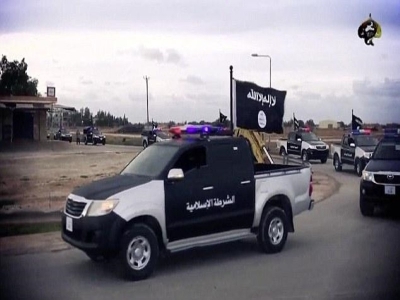 Despite heavy clashes and continuing bombardment by warplanes, artillery, and rocket launchers on the districts of Islamic State-controlled Deir-ez-Zor, and a state of instability and fear under which civilians live, the group has issued a series of new decisions and decrees.

The so-called “Islamic police in Waliyet al-Kheir” in the city of Deir-ez-Zor issued a new decree announcing the imposition of traffic fines, and assigned a specific amount to each infraction.

The website Deir-ez-Zor Is Being Slaughtered Silently published a list of the infractions, which include, “Not having a driver’s license, having an oversize load, driving the wrong way, and writing on the car,” with penalties starting from 500 ($2) Syrian pounds up to 10,000 ($45).

Most of the roads in the area are unpaved, some have been destroyed, and there are no road or transport services. The streets are also dangerous due to their proximity to the front lines and are subjected constantly to air raids by warplanes from the international coalition, Russia, and Syria.