"We save every human being who is being bombed regardless of their political affiliation ... our mission begins the moment the bombing begins to the moment wounded or dead are handed to the hospital" 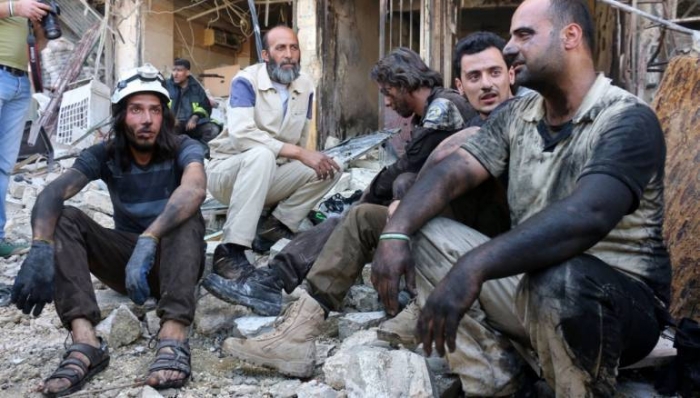 Over 50,000 rescue missions have been carried out by the Civil Defense volunteer group, also known as the “White Helmets,” since the beginning of the Syrian revolution in 2011, a senior official in the service told Zaman al-Wasl.

About 150,000 people from Idleb province were rescued following the armed opposition’s takeover of the city in March 2015 as the Assad regime began to drop barrel bombs on the city in retaliation.

The administration of the Civil Defense, one of the few Syrian institutions that was produced by the revolution, has the unanimous support of Syrians. As spokesman Majd Khalaf told Zaman al-Wasl, “(the Civil Defense) became a direct target for the regime military and in the media. From the media side, the regime is trying to place us in the category of belonging to a fighting faction, where as in reality our work is humanitarian, and we do not belong to any political or military formation.”

Khalaf added: “We deal with absolute objectivity, as we save the human being who is being bombed regardless of his political affiliation, we deal with the human as a human being, and our mission begins the moment the bombing begins to the moment the wounded or dead are handed to the hospital or the authority in control of the area, whether it was a brigade or the free police. We fulfill our humanitarian duties towards civilians in opposition held areas.”

The spokesman continued, “From the military side, we have become a target for the regime bombing, so when the regime targets a particular area with bombing the subsequent strike is for the Civil Defense team that are usually the first to arrive with the purpose of rescuing and evacuating. This is other than the bombing that targets the Civil Defense centers, which has led to the death of 115 personal and [the] injury of 300. The last bombing which targeted a Civil Defense center in al-Atarib in Aleppo’s northern countryside, and led to the death of five people and the destruction of several vehicles.”

Khalaf explained the Civil Defense administration is formed of 2,900 volunteers dispersed in 119 centers in most opposition-controlled areas.

“The team of the Civil Defense has become a side trusted by international organizations due to the disciplined performance and their closeness to events on the ground and for this reason our statistics are [dependable],” he added.

Khalaf indicated that during the truce period, 519 civilians were reported killed in rebel-held areas by regime bombing, as well the injury of 838 persons. Throughout this time, Khalaf says the regime dropped 217 explosive barrels on civilians in liberated areas, adding that “with the exception of the fronts we counted 932 air strikes, and 472 mortar artillery.”