“What we want from our friends is either to provide a safe environment, or enable the Free Syrian Army to provide it," says Coalition president 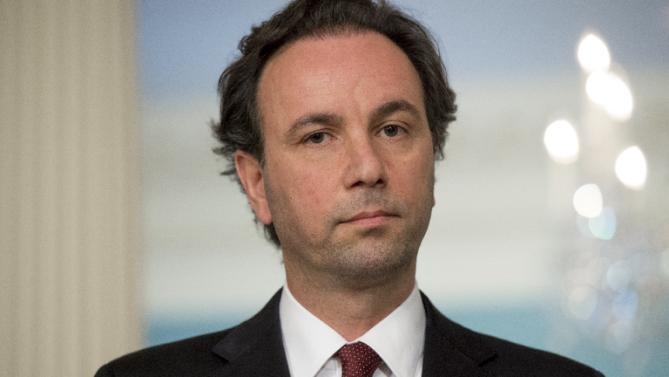 The head of the Syrian National Coalition, Khaled Khoja, has described Moscow's military intervention in Syria as a "dual Russian-Iranian occupation", calling on countries that met for talks in Vienna last week, as well as the other "friendly" countries, to work to stop the shelling waged by both Moscow and the Assad regime.

"If these countries are able to stop the shelling on the safe areas, that's good, if they are not, they should work to provide a safe environment for Syrians in these areas and the other areas, through providing the armed opposition with anti-aircraft missiles, enabling them to create this environment," Khoja said in an interview with Anadolu in Istanbul.

"Everyone knows that since the regime began to use the Air Force [in its war], it provided the suitable environment for chaos, igniting conflict in the liberated areas, using rockets and explosive barrels. In order to work on the provision of a stable environment, we should prevent regime aircrafts from bombing civilians.”

“The equation is clear, so what we want from our friends is either to provide a safe environment, or enable the FSA (Free Syrian Army) to provide it," said Khoja.

Furthermore, Russia’s military intervention in Syria – which began in late September – “is serving the Islamic State (ISIS),” the Coalition president said, adding: “The areas bombed by Russian aircrafts were opposition-held areas in the provinces of Aleppo, Idleb and Homs, which are residential areas controlled by the FSA, and the losses were largely among the civilians. "

"Raqqa was bombed, but there were no casualties in the ranks of ISIS. In actuality, [since the Russian bombing] ISIS has progressed in Aleppo and Homs, with the help of Kurdish People’s Protection Units (YPG). Currently Aleppo is besieged from three sides, by ISIS, the regime, and the Kurdish forces, which have opened the way for the regime to complete the siege around the city."

Khoja stated that the three parties, with the support of Russia’s air force, agreed to cooperate on the siege of Aleppo and dismantle the military power of the FSA and the other moderate forces.

Since the start of the Russian military intervention in Syria, Khoja noted, the number of casualties has nearly reached 1,800 people, while 250,000 civilians have been displaced from their local areas. More than a dozen hospitals have also been targeted, most recently the hospital in Douma, Damascus countryside, in addition to targeting field hospitals in Idleb, Aleppo, and Homs.

“The Russian bombardment is no less heinous than the crimes committed by the regime. As soon as the Russian military machine entered Syria, we considered it an occupying force, and we have the right to resist it,” he said. “The war now is a national liberation movement against this occupation, and the military factions on the ground are facing a double Russia-Iranian occupation.”

“The collapse of the regime after 2012 led to more Iranian military forces on the ground, but over the last two years, the regime collapsed further, and the Iranians could not help [President Bashar al-Assad] anymore, so Russia entered as a complementing force for the Iranian occupation," Khoja declared.

Regarding the Vienna meetings which took place last Friday, Khoja noted they were conducted amongst global and regional powers without the presence of a Syrian representative, regime or opposition, and as such cannot be considered a Syrian dialogue.

“[W]hat concerns us here is that these countries must produce results that lead to the cessation of the shelling of the Syrian people, and pave the way for the transition process. What resulted from that meeting is an agreement on the details, while the essential subject is the departure of Assad, who is the primary cause of the killing, displacement and extremism in Syria."

As for Tehran’s participation in the Vienna negotiations, Khoja said: "For us, Iran's participation is not positive, as from the very beginning, Iran supported the regime in the bombing and killing of civilians, and is no less dangerous than ISIS."

Responding to whether there remained contact between the Coalition and UN envoy to Syria Staffan de Mistura, Khoja explained that communication is ongoing "in the context of seeking a political solution framework."

Khoja also expressed his belief that the next phase will witness further coordination between the countries that support the Coalition, saying: "There are clear positions from the member states of the Friends of the Syrian People group, and it is very clear that the balance on the ground – even after the Russian intervention – is no longer favoring the regime.”

“The Russians continue to gain ground and pave the way for the regime to reassert their control, but the regime loses this ground two or three days later".

Khoja added, "the increased support of the friendly and brotherly countries has changed the balance on the ground. The regime has lost more than 70 tanks solely because of the presence of the anti-tank missiles. The next phase will need such missiles to provide a safe environment."

Remarking on the recent Turkish parliamentary elections and its impact on the Syrian scene, Khoja said: "since the beginning of 2011, the region is in a state of chaos. This had an impact on Turkey, especially in the presence of terrorist groups such as the PKK (Kurdistan Worker’s Party), which founded a very strategic environment through its branch in Syria, the PYD (Democratic Union Party)."

Khoja said the results of these elections, which showed a great victory for Turkey’s Justice and Development Party, "will bring stability not only to Turkey, but to the whole region," adding that the Syrians "felt relieved towards these results."

“Today, Turkey is perhaps the only supporter of the Syrian people. It bears the major burden of the Syrian revolution, through humanitarian and political support, as well as the providing services to Syrians residing in Turkey. After the results of the election, Turkey heads towards stability, and will definitely increase its support to the revolution."