Countries sponsoring terrorism must come to see they have reached an impasse and need to change their positions if recent Security Council resolutions are to be successful, top advisor to President Assad tells Lebanese TV 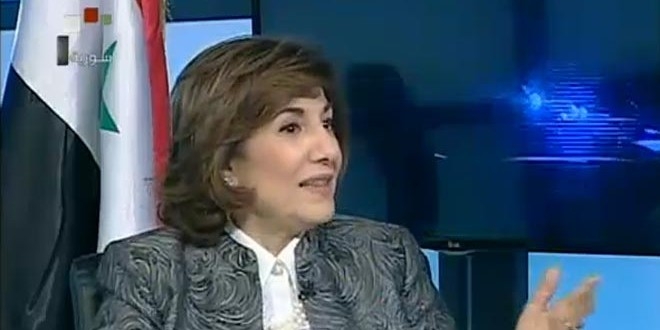 President Bashar al-Assad’s political and media advisor, Bouthaina Shaaban, said the adoption of Security Council resolutions 2253 and 2254 was prompted by the West’s failure in Syria, the success of the Russian-Chinese vision and the spread of terrorism to the US and France.

The war on Syria aims at imposing tutelage on it, which makes it of great importance that resolution 2254 asserts the Syrian people’s right to self-determination and maintaining its sovereignty and territorial integrity, Shaaban added in interview with Beirut-based al-Mayadeen TV on Tuesday.

She also referred to Resolution 2253, which calls for the draining of terrorist resources, saying this was a Syrian demand in the first place.

Putting the resolution into effect will depend on whether countries sponsoring terrorism can come to see they have reached an impasse and need to change their positions, said Shaaban, adding the resolution should be implemented immediately if an international will and intention exists to stop the targeting and draining of Syria.

Shaaban noted that in order for these resolutions to be implemented, it is essential to close the Turkish borders closed to terrorists and having the countries who are funding and arming terrorists held accountable.

“If they do that, it would be a real prelude to an effective political process with us definitely involved,” she said.

The top advisor affirmed that the Syrian decision will be extremely independent in the negotiations.

Asked about whether the Russian-US consensus is likely to be at Syria’s expense, Shaaban said differentiation should be made between what is put down on paper and what provocative media institutions try to promote.

“Nothing will be imposed on the Syrian state or [will] happen at its expense,” she added, stressing: “We are confident about the Russian-Syrian relationship and the kind of cooperation, understanding and communication between us.”

In her comments about the contradictory Western statements on Resolution 2254, Shaaban said, “It is not easy for the West to come to terms with this retreat.”

Shaaban made it clear that the worst has already passed for Syria and the situation is much better now than before.

Commenting on Israel’s recent assassination of Samir Kuntar, Shaaban said “Martyr Kuntar has surpassed the limits of geography, being a martyr for [pan-]Arabsim and rights in Palestine, Lebanon and Syria.”

"Israel, however, cannot assassinate the resistance,” she added.