IDPs want to return home despite the risks in order to escape the harsh conditions they go through in the camps, Iqtissad reports 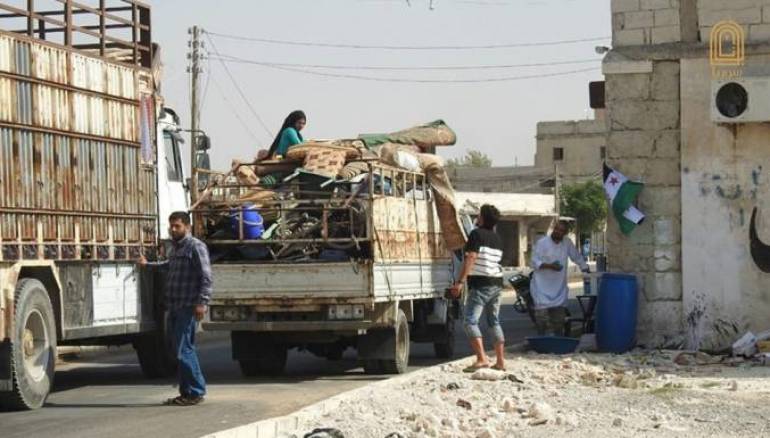 Assid returned to his village in the Jabal Zawiya region in northern part of the Hama province after months of displacement as the rest of his family are still in a camp near the Syrian-Turkish border, in anticipation of any possible attacks by regime forces to control what remains of a large pocket south of an international transit road that passes from Idlib.

The calm that has been witnessed in Idlib after the declaration of the “safe passage” agreement between Russia and Turkey on March 06 has encouraged thousands of IDPs to leave tents. They say that living in the tent is a very harsh punishment while the house remains more merciful even if most basic services are absent.

The Syria Response Coordination Team said that the number of those returning from the areas of displacement to the relatively safe villages and towns in the Idlib and Aleppo countryside reached 347,491.

Residents say they have returned to their homes hoping to get a better life after the bitter life they lived in in the areas of displacement.

The attacks launched by regime forces at the beginning of this year led to the displacement of nearly one million people towards the borders.

The Response Coordination Team said that about 33.37% of the displaced have left the camps.

Despite the commonly shared expectation of an approaching battle to control the city of Jericho, Abu Firas returned to the city, which is located south of the M4 international highway. At the beginning, the city was almost empty of residents, Abu Firas asserts. But as people were reassured that the calm would continue, the city was crowded with returnees.

Most of the displaced during the recent campaign were from the southern countryside of Idlib, such as Maaret al-Numan, Hayish, Kafr Nabl and Jabal Zawiya. Thousands of people have also been displaced from eastern Idlib, such as Saraqib and its suburbs, and from the western and southern countryside of Aleppo. The returnees who were displaced from these areas resided in Idlib, Binnish, Sarmin and Maarat Misrin.

Akram, who is from Saraqib, says that his hopes of returning to the city have completely dissipated. He settled in Binnish, an area near Saraqib, but which is still under the control of the opposition forces.

Akram added: “Life under a roof that protects you from the heat of the sun and the winter rain is a blessing that only camp residents know well.”

About 694,000 people out of one million displaced people still reside in the camps, according to the Response Coordination Team.

Some did not think of leaving the tents for fear of renewed fighting in southern Idlib, so they prefer to wait for a while, says Abdul Hamid, who is displaced from the southern countryside of Idlib.

Meanwhile, some returnees say they are getting used to the issue of displacement in the event of renewed operations.