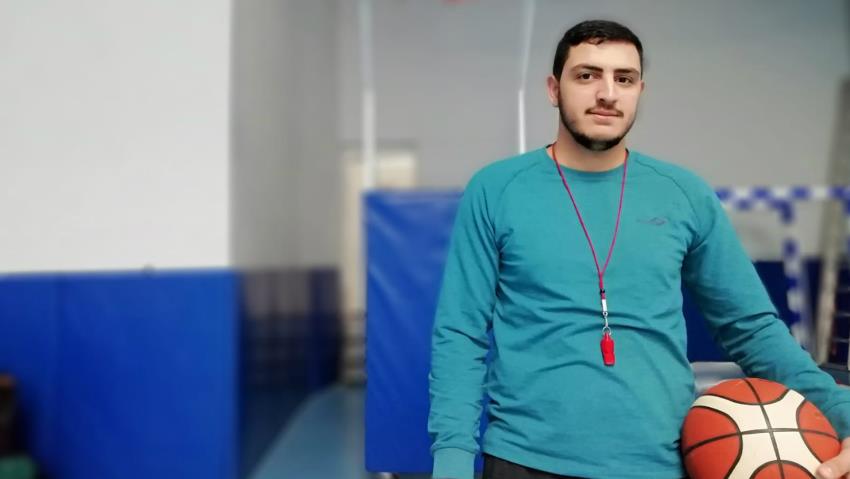 As soon as he opens the door leading to the basketball training room, the kids run and get ready to begin the warm up.

“Come on, put a little more effort in your exercises,” Haddad spurs his students in Arabic. Then he dribbles a basketball, passes it through his legs and dunks, showing them the correct way to do it.

Originally from Aleppo, Haddad is one of the half million Syrian refugees living in this Turkish border city, around 60km from Syria. He was only 14 when the war broke out, destroying his childhood dream of becoming a professional basketball player. Now 22, Haddad is the founder of Gaziantep’s only basketball school for Syrian kids.

Named simply “Syria”, as a tribute to Haddad’s home country, the school has been trying for the past year to give a sense of normal childhood to dozens of young Syrian refugees.

“I was lucky and proud to come from Aleppo. My hometown used to be among the best places to train sports talents because the government would invest more money for public infrastructures there,” says Haddad, who was part of the Syrian under 16 national team.

“Now, when you think of Aleppo, you just connect it to war and rubbles. I want that to change.”

When the conflict broke out, the Syrian national basketball league was suspended until 2015, and many professional players emigrated abroad, using their talent as a way out of Syria.

When the Haddads settled in Turkey in 2013, the father warned Zouher to forget about his passion, worried of the fact he would only be socially accepted as basketball player for his refugee status.

“He didn’t want us to be seen as just that, because back in Aleppo we were a respected family. He was embarrassed of our condition,” Haddad commented.

It’s forbidden for foreign players to join professional leagues in Turkey. As the citizenship process for Syrian refugees gets sloppier and more complicated, those with sports ambitions have limited options. And children’s dreams in particular remain forgotten in an already dire situation of resettlement, with sports club not giving them enough room for self-development, as Haddad noticed while growing up as a Syrian teenager in Turkey himself.

With the goal of creating a safer space where new displaced generations could have the lifetime opportunity he was denied as a young adult, he opened his own private basketball school, which turned into a mission.

Mohammed Ali Damlaki, 14, watches coach Haddad’s smooth moves in awe, hoping to reach that same level of perfection on the court. “He trains so well and gives me confidence,” he says. “So I decided to join his school, knowing I’d be sure to improve.”

Many Syrian parents say they signed up their children to Haddad’s school to put them in a place where they would be treated as simple kids, not refugees first.

As the majority of participants escaped from war zones, some of them also think the school offers some kind of psychological relief.

Dina Mousa says her sons feel that the team under the coach’s leadership is like an extended family. “He doesn’t only make sure they’re physically on track, but also mentally, through simple gestures.”

Mousa explains that the combination of being forced to leave Syria abruptly and being in the delicate teenage years, one of her sons, Omar Tarben, was often depressed and would panic when faced with small changes, even as simple as adjusting to a new pair of shoes.

“Coach Haddad was there for him and helped him find the right basketball shoes, that would make him feel at ease. Through such a small gesture, he slowly helped him build trust and self-confidence again.”

From the bleachers, a member of the audience gets up and corrects one of the players’ moves, giving him advice. It’s Ali Haddad, Zouher’s father, who often comes to watch the games. After seeing the efforts and successes of his son, he’s finally changed his mind and supports him.

“I know my son has talent and that he would’ve been a perfect player for our national team,” he says. As a former professional kung fu athlete, he’s sad his country’s once-fertile sports environment, among the best in the Arab world, is now only associated with conflict.

“I’m proud of my son for making a difference and giving a new hope to these children. Since he couldn’t make it, he’ll make sure this new generation growing outside our country will still manage to realise their dreams, despite the deprivations of a life in exile.”

Twelve-year old Said Omari recently relocated to Gaziantep from Beirut, where he lived for four years in a refugee camp with his mother. “This has been the best way to start making new friends in a place I don’t know, and feel happy again, at least twice a week,” he says.

His teammate Omar Tarben, 15, tells his best memories from his time in Turkey are connected to this school. He likes to remember specifically his brother’s birthday last January. “We sang ‘Happy Birthday’ in Arabic and everyone was happy, it was like being home in Aleppo for a moment. It felt cosy, almost normal” he says with teary eyes.

According to Save the Children’s latest report, four million Syrian kids have known nothing but a life of war. Others have never seen Syria, as they were born abroad. As a Syrian refugee and teenager who experienced both conflict and exile, Haddad knows how his players want to be treated: as normal kids with insecurities and dreams, not with pity.

Through his independent work, Haddad aims to build a different, resilient community of Syrians in Turkey that still produces excellence, against all odds. In fact, he doesn’t only train them to have fun, but also stresses on quality, “so when the war will end, they’ll be ready to rebuild Syria’s sports landscape, and be competitive enough to play with foreigners,” he adds.

As he shows the kids some new moves, you can see in Tarben’s eyes the complicity and trust in his coach in taking him where he wants to get: FIBA World Championship, inshallah, he says.

Stefania D’Ignoti is a freelance journalist covering migration and society in Italy and the Middle East.