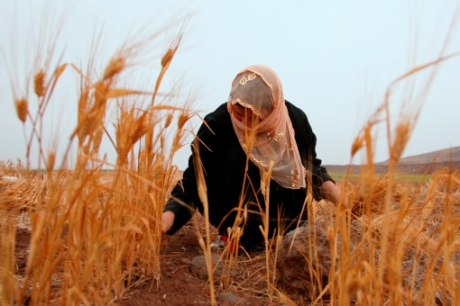 Areas which lie outside of regime control in northern Syria are suffering from a stalling of the production cycle and the subsequent absence of resulting business relationships. In light of the ongoing war, there is no integrated production cycle, as the “war sector” prevails over most other sectors. The most prominent sources of income in these areas are salaries and aid coming as compensation for fighting alongside rebel groups, in addition to employee salaries in institutions connected with the opposition. Other sectors, such as agriculture, industry and trade, suffer from several problems which have made these seasonal and temperamental sectors in thrall to the military and security situation in the area.

With that, there has been no absence of local initiatives carried out by residents challenging the difficult conditions, while many look to find sources of income in an attempt to become self-dependent amid the difficult wartime conditions they endure.

With the expulsion of the Islamic State group from the northern Aleppo countryside, residents have looked to activate the productive sectors in the areas of agriculture, industry and trade, which produce reasonable incomes to support the local economy, create employment, and eliminate the joblessness that has been spreading for more than five years.

The agricultural sector has nearly stopped while waiting for the return of farmers and their support, which is important in achieving a state of food security in Syria, while labor in this sector comprises the only source of income for about a quarter of residents. But this sector has faced severe damages while the production of seeds has declined steadily every year. The United Nations Food and Agriculture Organization (FAO) said in mid-November that “food production in Syria has hit a record low” and said that the “The area planted with cereals in the 2015-16 cropping season is the smallest ever … Farmers planted an estimated 900,000 hectares of wheat in the last year, compared to 1.5 million hectares planted before the crisis. Production, meanwhile, shows an even more drastic decline, from an average 3.4 million metric tons of wheat harvested before the war to 1.5 million metric tons this year – a decrease of 55 percent.”

However, farmers have begun to return to their land after the explosion of ISIS from the northern Aleppo countryside, raising the possibility of the agricultural sector being revived in the region. Those who have returned expect many challenges after they began planting their land — most prominently the rising prices of seeds, fertilizer, pesticide, fuel, and the transport costs, at a rate which does not correspond with the increasing prices of the yields they produce, as well as the declining quality of fertilizer and pesticide.

Despite that, agriculture remains the backbone of the means of life in the countryside and maintaining food supplies in the region. It is also responsible for employing the vast majority of the labor force, which means that it bolsters stability, and attracts displaced people to return to their villages and towns to practice agricultural activities again, which had long been their main source of income.

The need must be stressed for the opposition institutions to support farmers with seeds and fertilizer, which will push them to invest in their own lands. The efforts of opposition institutions must support the continuation and activation of this sector, which is one of the most important economic sectors in the northern Aleppo countryside and depends on appropriate environmental and natural resources for its success. In addition, large areas of lands which can be planted with various strategic food crops could achieve an important aspect of food security for the people of this area and thereby reduce their dependence on international organizations to secure it.

Farm manager Samer said that he had decided along with his friend to begin the project despite the strong criticism they faced as many of those who knew the men told them, “You’re crazy, you could lose all the money you have if the security or military situation changes in the area.”

Samer said that the “local commercial initiatives whose incomes are based on raising livestock face a number of difficulties, perhaps the main one being the difficulty of securing the necessary fodder due to the transport routes being cut off, as well as the increasing price, while it is not possible to sell the surplus animal products to distant areas such as the western Aleppo countryside and Idleb, for example, without paying huge fees to the Kurdish PYD militias which control the city of Afrin in the northern Aleppo countryside, which is the route you need to take from the northern Aleppo countryside to the western countryside and, from there, to Idleb and Hama.”

This reflected positively on the role of agricultural production in the northern Aleppo countryside and positively and directly affected the local community, which suffered a great deal from the major loss of goods and animal produce, such as eggs, meat, milk and its related products, and the increase of prices because of the lack of competition, the low supply, and the increase in demand.