According to leaders in the Islamist and moderate groups, Western diplomats, and officials and civilian activists in Aleppo, 10 reasons can be noted for the “Aleppo coup" 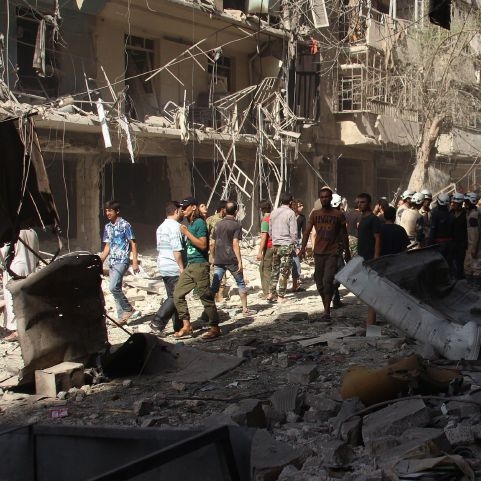 The “six-day war” which Islamist and opposition Syrian factions launched, left them in control of 25 positions formerly held by regime forces and their allies to the south and southwest of Aleppo, and broke the siege imposed on the eastern districts of the country’s economic capital. It overturned the balance of power over the course of a week, as regime loyalist morale collapsed and opposition morale rose.

Regime forces and their allies are mobilizing thousands of Syrian fighters as well as Arab and Asian militias, including Hezbollah and the Revolutionary Guards, to regain the initiative in Aleppo and stop the advance of opposition forces, who announced that the final goal of the battle is to take complete control of the city. This includes Aleppo’s western districts, which are home to 1.2 million people in addition to the 250,000 living in the eastern districts, making the battle for Aleppo a fateful one that could determine the course of Syria’s future. And as regime forces and their allies achieve progress in the strategic town of Kinsabba in the Lattakia countryside, the possibility that its effort to win in the eastern and western suburbs of Damascus or Jisr al-Shughour between Idleb and Lattakia has receded.

According to leaders in the Islamist and moderate groups supporting the “Military Operations Room” under the guidance of the CIA (the American intelligence agency) in southern Turkey, as well as Western diplomats and officials and civilian activists in Aleppo and its countryside who have spoken to Al-Hayat over the last few days, 10 reasons can be noted for the “Aleppo coup.”

1 — Huge numbers. Between 8,000 and 10,000 opposition fighters from two alliances participated in the battle: first, the “Fatah Halab (Conquest of Aleppo) Operations Room,” which includes moderate groups included in the Military Operations Room, such as the Nour Eddin Zinki Movement, al-Jabha al-Shamiya, Liwa al-Sultan Murad, Division 13, the Eagles of Jebel al-Zawiya, and the Central Division.

The second alliance is Jaish al-Fatah, which includes Jabhat Fatah al-Sham (previously the Nusra Front) with about 2,500 fighters, and the Ahrar al-Sham movement, with about 2,500 fighters, as well as their allies Jaish al-Sunna, Faylaq al-Sham, and Ajnad al-Sham, which have controlled the whole province of Idleb since spring of last year. The group Jund al-Aqsa, which is affiliated with ISIS, did not participate, amid reports that the group was preparing to attack Hamah in compensation for its lack of participation in the battle for Aleppo, in which fighters from the Asian Islamic Turkestan Army (made up of Chinese Uighurs) participated.

2 — Widening of the battlefield. The frontline has extended to a length of 22 kilometers from al-Amariyeh south of Aleppo, Project 1070, and al-Hamdaniyeh in the southwest of the city to Aleppo’s northwestern entrance and the Handarat camp. The battles that made up this offensive were divided into stages beginning with taking control of hills, strategic points and Project 1070 and then advancing to the second stage at the Artillery School and al-Ramousiyeh, coinciding with another attack inside the besieged eastern districts.

3 — “Life or death.” Since regime forces and their allies, with support from the Arab-Kurdish Syrian Democratic Forces, took control of the area of al-Sakan al-Shababi in al-Ashrafiyeh and al-Sheikh Maqsood on the Castello crossing into the eastern districts of Aleppo on July 17, every rebel group has felt that it is being strangled, since most groups had fighters inside the besieged areas. There was therefore pressure on all groups and their leaders and allies to do something. There was also a belief that if the regime and its allies gained control of Aleppo, the opposition would be finished, because after Aleppo, Idleb would be isolated and surrounded, and then the opposition would be done for. In other words, “the battle for Aleppo is life or death.”

4 — Surprise. The expectation was that opposition fighters would carry out an attack from the Castello crossing or eastern Aleppo. But, surprisingly, they chose a more difficult battle in southwestern Aleppo, site of the biggest bloc of regime and allied military bases.

5 — Unity between the Islamists and moderates. For the first time there was large-scale coordination between the Islamist and moderate groups, those affiliated with regional powers and America and the West. No doubt the Nusra Front’s decision to distance itself from Al-Qaeda made it easier for all the groups to work with the new group, named Jabhat Fatah al-Sham. For example, the Division 13 group, which fought against Nusra in Maarat al-Nouman and has had members kidnapped by Nusra, now fought with them side by side, because according to one of the group’s leaders, “we forgot our differences in order to fight for the national project.”

6 — Independent decision-making. It was clear that in this battle, there was wider room for the independence of local, regional and Syrian rebel decision-making. No doubt the approach of the end of the Barack Obama administration gave wider space to local and regional players, in addition to the organizational and fighting morale of the opposition, especially among the Islamists.

7 — Military support of a kind. There are reports that weapons and ammunition reached the opposition about a week or 10 days ago with the beginning of the battle. It was clear that there was new ammunition and new military equipment, like reconnaissance aircraft. The command and control capabilities of the rebels were also apparent, and there was clearly a Turkish role in the operation. Some argue that the date of the attack was meant to precede Turkish President Recip Tayyip Erdogan’s meeting with President Vladimir Putin on August 9.

8 — The absence of an American “veto.” These expectations were also connected with the American-Russian negotiations in Geneva last week to reach a military cooperation agreement including stopping Syrian flights and the targeting of the moderate opposition in exchange for cooperation between American and Russian warplanes in fighting terrorists and the Nusra Front. But the matter took a different course last week – when Moscow announced the opening of three “humanitarian crossings” and a fourth for fighters, US Secretary of State John Kerry spoke about “Russian deception.”

9 — Lack of coordination on the regime side. Thousands of regime and allied fighters participated in the battle, including the Syrian National Defense Forces, Lebanon’s Hezbollah, and the Palestinian Liwa al-Quds, as well as Iraqi, Afghan, and Iranian militias supervised by the Iranian Revolutionary Guard, in addition to the participation of Syrian warplanes, both bombers and helicopters, and the Russian warplanes massed in the Lattaka base in Hemeimeem in the country’s west. But it seems that the coordination between the allies was not at the required level, and that the regime army was not up to its allies’ expectations, and collapsed quickly.

10 — Mystery of the Russian warplanes. It is still unclear exactly what role Russian warplanes had in the battle. It is true that they offered air cover, but they did not pursue a “scorched earth” approach. In addition, the street fighting and overlapping battles between the regime and opposition on the ground weakened the role of Russian aircraft. It is not known whether this was a decision from Moscow to pressure Damascus and Tehran, or instead an operational issue. It was noteworthy that the Russian aircraft focused on Idleb, especially the city of Saraqeb, where a Russian helicopter was downed before the Aleppo battle. But it is not clear if this was punishment for the people of Saraqeb, or to destroy car bombs, or to pressure Idleb’s fighters to withdraw from the battle for Aleppo.

Opposition leaders and diplomats say that the battle for Aleppo was “a turning point, but not the end,” and that it made apparent the limits of the Russian intervention’s capabilities and the extent of the regime army’s weakness, especially since this was the biggest loss since the Russian intervention started at the end of September. It is also noteworthy that Jabhat Fatah al-Sham has begun gain to greater popularity and leadership ability, and that it has become easier for the other rebel groups to work with them as American-Russian negotiations are continuing to be held in Geneva that aim to isolate the moderates from the extremists rather than integrate them.