The U.S. is 're-educating' radical Islamist fighters to serve in its campaign against the Syrian army, Firas Deeb writes 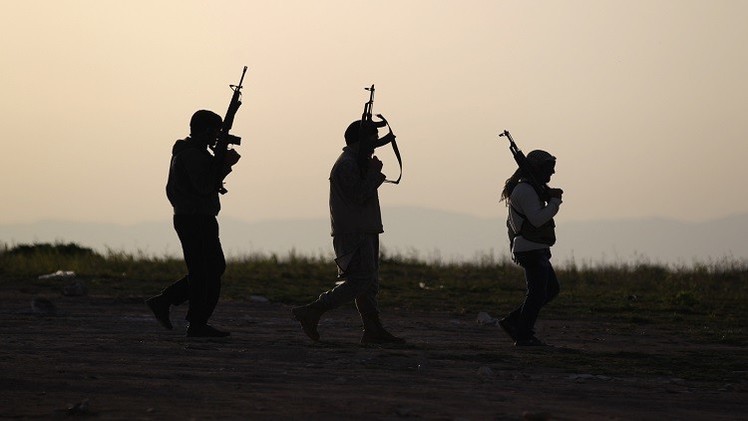 The Pentagon’s coming strategy in Syria is to reintroduce the remnants of the Islamic State (ISIS) group into the Syrian Democratic Forces militia in preparation to fight the Syrian army. This effort has begun to materialize on the ground after the Russian Reconciliation Center in Hmeimeem issued reports that the United States has established a formation it calls the “New Syrian Army” out of a group of defectors from the terrorist groups in the Hassakeh countryside, confirming that half the strength of the current forces is from the remains of ISIS.

The Russian talk does not appear be politically charged, but if we expand the view a little we can see what the Russian claims establish indirectly. For example, one of the official French channels broadcast a half-hour report around the “ISIS prisoners” held by the SDF militia. The program showed how the captives were treated in order to have them relinquish extremism and accept a moderate state. The report offered its best propaganda when it showed the prisoners shaving their beards and taking lessons in “Marxist thought” and “moderate Islam.” This program, although it is not the first on the coalition’s role in liberating Raqqa, may be the first which talked about the militia’s leaders rehabilitating these terrorists in preparation to return them into battle. The logical question here is what battle they are discussing. The answer, confirmed by the Russians, is that the Americans are preparing for the post-ISIS stage, but this stage does not appear to be as the Russians would like. Put another way: The Russian-American dispute around Syria is entering a new stage which seems more important.

The Russians, who are trying, through President Vladimir Putin’s announcement of a scale back in Syria, to highlight the American presence’s illegitimacy, have failed to achieve their aims. The American response was to disregard the Russian step. The Pentagon does not seem ready to retreat on the Syrian issue, and is instead insisting on the track of impeding any Syrian success along two lines: The first line is linked to the military issue and reducing Russian achievements in fighting terrorism. Trump was not the only one to come out to steal the victory of the Syrian army and its allies against ISIS, but was followed in that by the French President Emmanuel Macron.

It seems the American can be forgiven for this mistake because of his shock in witnessing President Bashar al-Assad’s visit to Moscow and the following visit by Putin to Syria as a declaration of victory.

The second line relates to the political solution. The American — who sells the media free statements that the Syrian people are the ones concerned with the future of President Assad — knows that the path of reconciliations created by the Russians has become like a vast river which excludes no one. This campaign may be accompanied by an earthquake caused by the entry of the Syrian army to the city of Afrin and its countryside after an agreement with the militia in control of the area, and may not end at the Eastern Ghouta and the unexpected numbers of those who want to lay down their weapons and evacuate civilians.

The first Geneva talks began in February 2014, and after four years Geneva 8 was mourned. We are almost certain that in 2022 we will mourn Geneva 16. This is not an issue of astrology or the prediction of events. In order for the idea to become clear to us, we must ask why the chain of these Geneva meetings has failed to create any breakthrough, and when will Geneva achieve what is required of it? The answer is simple: When the Syrian opposition comes in one delegation that excludes no one in terms of movements, parties, platforms and independents, whether inside or outside the country — only then can we expect results from Geneva.

If the opposition goes as one delegation this means in fact that the countries sponsoring these opposition figures have agreed among themselves and that this agreement will be reaped in the political solution, without preconditions.

The Americans are well aware of this, and therefore have called to derail Geneva 8 before it began, not just when the opposition Riyadh platform issued its statement placing preconditions, but when the international envoy Staffan de Mistura announced the so-called “principles paper” in which he tried miserably to withdraw the Syrian official delegation’s pretext for objecting to the opposition statement and turn it into an objection of his document to blame the official delegation for the failure of the negotiations. This effort was aimed at ensuring the fate of the Syrian solution will revolve between the hammer of a subservient opposition and even more subservient international envoy, and the anvil of American military bases which will remain a “Juha’s nail” to create terrorists on demand. Are these the alternatives we are waiting for?

When we speak of alternatives we must speak on two levels. The first level is the international level, and put simply the two great states have no alternatives to Geneva, because for them it is a time-cutting phase and no more. They resemble two contestants putting a finger on the ground and revolving around each other. The winner is the one who holds out longest. Therefore the United States is maintaining the bases and forces it wants knowing that the most important battle for them is coming against the Syrian army, when it sees that the Russians begin to feel dizzy.

On the local level, the activation of the Sochi conference needs to be the logical solution. However, this idea needs to not be limited to the framework of political parties and entities inside and outside Syria, specifically as some of these parties have no standing in emerging parties — indeed it must also include the independents to be a logical alternative. That is, we have entered a stage in which we are proving that what we are awaiting can be made by our hands, and perhaps the foundation stone for that will be the reduction of the territory which the terrorist groups control. What if these groups for instance lose the city of Idleb and its countryside? Then we would say goodbye to Geneva forever and welcome Sochi.

Otherwise we will remain in a spiral imposed by the Americans through mercenaries who have taken various shapes. In short, delegitimizing the American presence in Syria will only be done by Syrians.