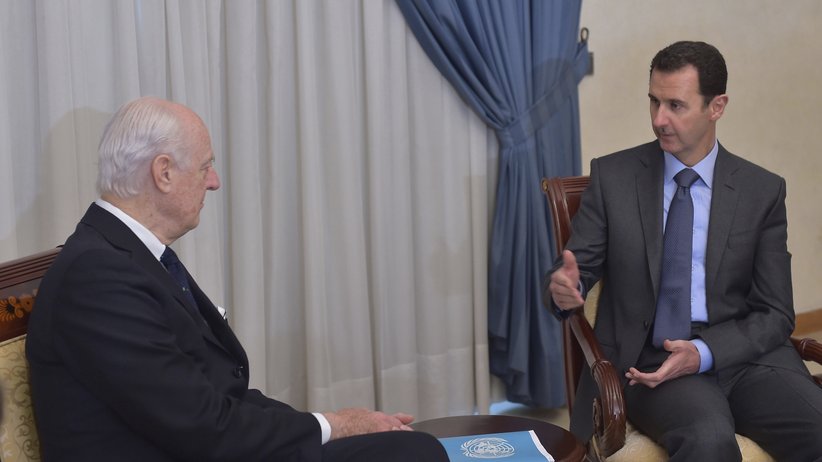 Last month, the Syrian opposition made a big pivot when it convened in Riyadh at the invitation of Saudi Arabia. The members of the High Negotiations Committee (HNC) resigned together with a dozen senior opposition leaders, as two other minor factions joined a newly formed negotiations body. One of these new parties was the Moscow Platform, which represents the interests of Bashar al-Assad and Vladimir Putin over those of the Syrian people. The Riyadh conference's closing statement accepted to enter talks with the regime, removing its pre-condition that the Syrian dictator must step down before negotiating the transitional stage.

But the regime’s response was unsurprising. The head of the Syrian government delegation to the peace talks in Geneva strongly “condemned” the opposition over the communique.

“As long as the other side sticks to the language of Riyadh II, there will be no progress,” Bashar al-Jaafari told reporters.

He added that those who drafted the "provocative and irresponsible" Riyadh II statement were simply seeking to undermine the mission of U.N. special envoy Staffan de Mistura, stressing that the peace talks in Geneva are “not a vicious circle.”

Jaaffari’s comments caused de Mistura to lament the regime’s position. He returned fire on the Syrian government delegation for setting preconditions on direct negotiations, saying it would be difficult for backers of any future talks to make progress “if the government is not willing to meet anyone who has a different opinion.”

There is a good lesson one can learn from this: If you take a step in the regime’s direction, it will take 10 steps away from you. The concessions the opposition makes will only be met with a firmer position from the regime.

This is quite understandable.

Bashar al-Assad’s regime was on the verge of collapse in 2015 when his loyal friends rushed to his side. President Putin sent his troops to cover the Syrian air while Ali Khamenei boosted his militias on the ground.

But it was Assad’s own enemies who were more effective. The sponsors of the Syrian opposition have worked hard to divide and weaken the resistance. The regional supporters have spent billions of dollars not to sustain and unite the political opposition but to divide it according to ideologies and loyalties.

The Trump administration, which is yet to announce an American strategy for Syria, has said it is willing to let Assad stay in power until 2021 when his current term is set to expire. But as one prominent journalist recently put it in The New Yorker, “Depending on the outcome of the 2020 U.S. election, Assad could still be in power after Trump leaves office. U.S. officials worry that Assad could win the 2021 Syrian election, one way or the other, and remain in power for years to come.”

“Recent reports that the Trump administration is willing to accept four more years of Assad’s rule in Syria are deeply disturbing. If true, this will only validate the de facto policy of two successive U.S. administrations that have failed to do anything meaningful to end the slaughter in Syria. […] Assad’s continued rule will only lead to more violence and radicalization in Syria, and provide fertile ground for extremist groups to grow,” McCain said.

He added that “U.S. policy in Syria should be clear: Assad must go. We must be willing to back that policy with a strategy for achieving a post-Assad Syria where Syrians can live in peace and security, free from terror. That cannot happen soon enough, and it certainly cannot wait four more years.”

The individuals who head America’s policy on Syria are the same diplomats appointed by Obama. President Trump has repeatedly blamed Obama for failing to act decisively toward the Syrian crisis. Now it is Trump who the Syrians expect to correct the faults of the former administration. Instead, the United States has passed the buck to Russia and Iran, who have developed zones of influence that neither protect Syrian civilians nor safeguard the interests of the United States and its allies. Rather, the move has empowered radical Islamists on all sides — from Iranian militias to hard-line Sunni groups — to continue expanding their territorial control and spread their radical ideologies.

This U.S. non-policy on Syria has deterred Europe from forming its own clear and firm strategy, helping Assad to bolster his position and refuse the concessions made by the opposition. This opposition is now in its worst state, politically and militarily, but most importantly it has lost its remaining credibility among the Syrian people.

Overall, the opposition has every right to change its discourse, but on two conditions: To explain to the Syrian people why it should do so; and to be aware that offering concessions to de Mistura and the Assad camp will not pay off as they think.