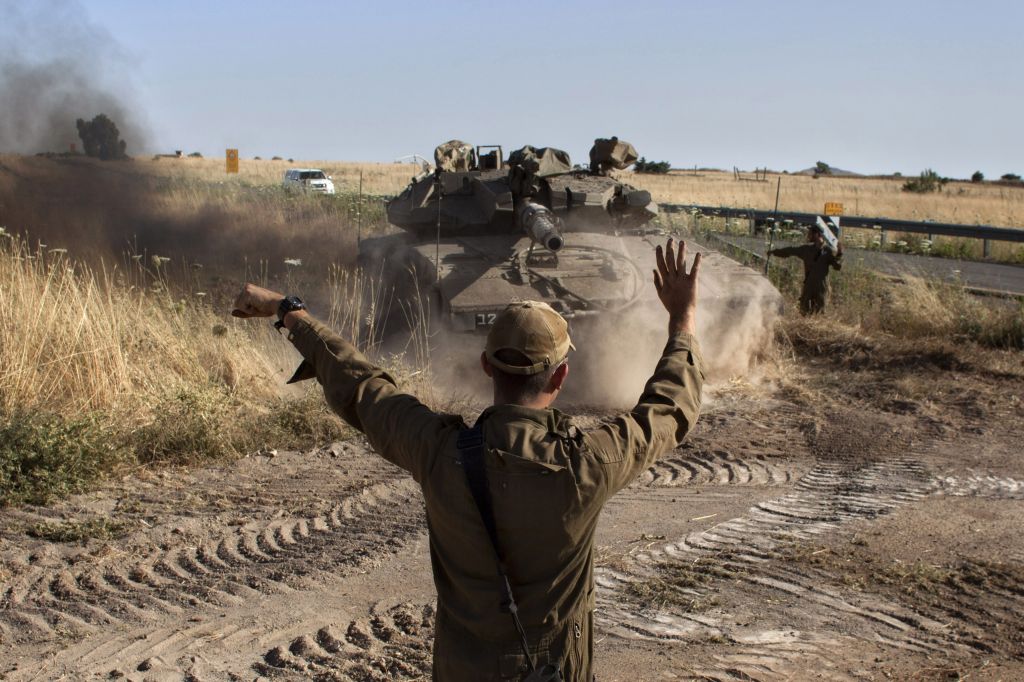 It appeared that the Israeli escalation toward Syria and the Axis of Resistance has not reached the volcano crater yet, but is still heating up with the aim of evicting Iran, as leader of the entity [Israel] claims.

This could lead to development in the form of the conflict toward a war whose features, elements and parties will go beyond the regional system, especially after the media campaign, diplomatic pressure and military logistical measures which have become clear recently.

Beginning with a repetition of the theatrical "Bolly" model by the head of the occupation government, Benjamin Netanyahu, who threw himself into a meager presentation that aimed to change the moods and stances of the Europeans about the nuclear deal and strengthen the alignment with the Gulf states and prepare for the American withdrawal from this agreement.

Along with this, the Harry Truman aircraft carrier has arrived to the Mediterranean to flex its muscles and its military capabilities in striking Islamic State (ISIS). This ended with Netanyahu’s visit to Moscow to take part in the victory celebration and wait for the outcomes of his expected meeting with Putin for the eighth time, which Netanyahu described as being more “particular and important” because it is the last of the diplomatic possibilities to contain the escalation which the Syrian stage will see.

For the first time in seven years, indicators are growing of the eruption of a spark of confrontation between the Axis of Resistance and Israel, which has tried over the last few years to carry out controlled hostile actions within the so-called “operations without war”.

This has not managed to change the balance of powers in the Syrian map to Tel Aviv’s advantage, but has increased the unity of the fronts of the Axis of Resistance and has not succeeded in entrenching an armed nucleus to protect its northern border or a political situation which establishes military buffer zones. These changes have produced new rules of engagement which do not accord with Zionist ambitions and agendas in light of the decline of American influence in the region to the benefit of the Tsarist return of Russia.

The unenviable considerations of the Netanyahu government domestically and abroad are one of the most important indicators of predicting the development of this conflict:

On the domestic stage, the hostility of the Zionist entity and the aggressive tendencies that have characterized it since its appearance in the region, represented in striking surrounding countries and pushing them to humiliating agreements, along with the tyranny of the extreme right within Israeli institutions at the security, military and political levels, and the deteriorating judicial situation for Netanyahu on the basis of the charges leveled against him and his wife recently pertaining to corruption, bribery, and his desire to put himself among the immortal names and characters of his alleged state may, all push him toward an adventure through a step forward.

On the foreign level, Tel Aviv is still misinterpreting the changes occurring in the balance of power within the international system — or intend to not understand it. It is hardening its stances and behaviors to maintain American influence in the region. Within the context of this hardening, Tel Aviv has managed to form blocs and alliances in the first precedent of its kind. Through this, it has changed its approaches and priorities and thereby hopes for a strategic relationship with Moscow which guarantees its superiority and preserves its security, as it claims.

Netanyahu, who has not hidden his desire to confront Iran sooner or later, as he discussed in his latest meeting with his government and before traveling to Moscow, may be serious about this now as getting into a bone-crushing war today is better than doing it tomorrow or after tomorrow, according to his thinking.

Syria has begun to move its elite forces toward the south in order to bring down the Zionist federal project, which could, in cooperation with its allies, reshuffle the cards on the Golan front on the model of the Lebanese south and the Gaza Strip in its strategic attempt to build a new deterrent to confront Israel.

The Iranian response to the aggression of the T-4 base has approached and therefore the reins of the initiative and surprise will be in the hands of the Axis of Resistance in terms of style and time.

Israeli recklessness could be a fait accompli as it has an analogous presence in the American administration, which is filled with extremist hawks who declare their total support for Israel and share with them their opposition to Islam, the Resistance and Iran, and wish to contain Russian influence and restore America’s hegemony at a global level.

The statement of the deputy chief of the general staff of the Israeli army, Moshe Kaplinsky, that the coming war would be alongside American forces may not be a fantasy.